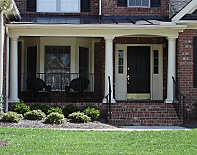 Porch columns are the heart and soul of your home’s exteriors and have the biggest influence on your curb appeal. And you have the ancient Greeks to thank for that!

The style of most porch columns you see in American homes originated from ancient Greek architecture.

The shape of the column, the amount of ornamentation on its capital and base and their respective shapes are all factors that determine its style. Most porch columns you see today are inspired by one of the three predominant column styles found in Greek architecture, namely, Doric, Ionic and Corinthian.

Doric porch columns:
A Doric column is characterized by a square block at the top, a rounded element underneath, a thick, fluted column and a square block at its base. This is the simplest and earliest known column style and can be found on the Parthenon in Athens. Doric columns are sturdy and they may be easily identified by the solid, square block on top and at the base. They were designed to support heavy roofs such as those of the Parthenon. Today, you can see this common porch column style in many homes and monuments, including The Lincoln Memorial.

Ionic porch columns:
Anytime you see scroll-shaped ornamentation on a porch column’s capital, you can tell it is an Ionic column. Unlike Doric columns, Ionic porch columns rest on a smooth, rounded base, but may also have a square section. You can easily spot the layered base on this type of column. The column itself is thinner, which is another way to differentiate it from a Doric style column. The Thomas Jefferson National Memorial is a great example of the uniquely enriching and defining quality of ionic porch columns.

Corinthian porch columns:
The Corinthian columns have the most decorative features of the Greek columns. Thin columns and capitals carved in the shape of flowers and leaves characterize this type of column. The base in these types of columns, although somewhat similar to the Ionic column bases, feature beautifully carved elements too. The Corinthian capital itself is inverted-bell-shaped thus making it distinct. You can spot the Corinthian columns in the US Supreme Court Building.

The porch columns in modern homes may be influenced by one of these three Greek styles or even employ a combination of styles. Another commonly used column style is the Romanesque style.

In this style, you will see large, trapezoid bases supporting square columns featuring floral or other carvings on their capitals. In Mission and Craftsman style homes, it is common to see simple pier columns that are wider at the base and taper towards the top.

Each column style has its unique visual character that makes an impact on your home. The column style you choose depends on your home’s style, your taste and the purpose of the porch column.

Which is your favorite column style? Feel free to write to us if you have questions about choosing PVC porch columns or fiberglass columns for your home.